The Fraunhofer Innovation Platform for Drug Discovery and Delivery at the Hebrew University in Jerusalem, Israel, (FIP_DD@HUJI) is a joint research institution of Fraunhofer IGB and the Institute for Drug Research of the Hebrew University. The focus is on discovery and validation of new antiinfective and anti-inflammatory compounds as well as targeted nanoparticle based delivery systems for virual infections and autoimmune diseases.

The FIP_DD@HUJI is the continuation of the Fraunhofer Project Center for Drug Discovery and Delivery. It started in October 2018 and was extended in 2020 for a period of three years. The Innovation Platform was jointly headed by Prof. Dr. Steffen Rupp (Fraunhofer IGB) and Prof. Dr. Gershon Golomb (HUJI). In September 2021, Prof. Dr. Ofra Benny took over the position of director at HUJI.

The Fraunhofer Innovation Platform combines several innovative technologies to support pharmaceutical companies in the development of new active substances at the preclinical phase. Main activities are in drug discovery and targeted delivery:

A combination of computational chemistry (on the part of HU) and a patented reporter gene assay (from IGB) is used with the aim of finding new Toll-like receptor antagonists (TLR) for modulation of the innate immune response.

During the preceding project “JRHDD – Joint Research Hub for Drug Discovery and Delivery”, 17 potential antagonists with high IC50 value were identified from 1.8 million commercially available molecules, and these were registered for patent [2].

Another focal point is the development of new therapeutic strategies against herpes simplex viruses (HSV). Herpes viruses cause lifelong latent infections in neuronal cells and cannot be eliminated at present. Substances such as antimicrobial peptides kill the virus but are also highly toxic to eukaryotic cells. RNA-based drugs represent a possible alternative to the antiviral drugs used to date. The use of RNA interference (RNAi) makes it possible to switch off the genes involved in the proliferation of HSV-1.

Current challenges in the application of the RNAi method arise from the fact that the inhibitory RNA is rapidly degraded by the body’s enzymes and, due to its negative charge, has extremely low membrane permeability. To overcome these problems, the Project Center uses liposomal formulations for the targeted transport of RNA molecules into the infected cell.

For encapsulation and targeted transport of active substances, e.g. siRNAs which block virus replication, liposomal formulations with optimal physico-chemical properties [3] are being developed at the Project Center. Liposomes are efficient drug delivery systems that protect the active ingredient from degradation, improve its pharmacokinetic properties and release a high concentration of active ingredient at the site of action. Targeting is performed using special navigator ligands that bind specifically to cell-type-specific receptors. 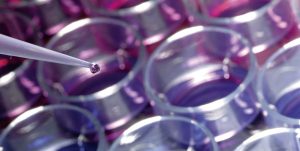 In the anti‑corona project ISE‑CoV‑2‑Screen Fraunhofer IGB and FIP_DD@HUJI are identifying therapeutic substances for the treatment of COVID‑19 patients. The focus is on molecules that have already been approved for another indication or are at least at an advanced stage of development (repurposing of drugs).

Already approved active molecules of the pharmaceutical database DrugBank were pre-selected using computational chemistry. These have the following properties in silico:

When screening 14,245 modeled compounds, 69 potential candidates were identified that possess at least two of the above multi-targeting properties. Subsequently, the pre-selected active molecules are validated in adapted in vitro test systems. These consist of human cells overexpressing the target receptor ACE2 of the virus or genetically modified reporter cells overexpressing viral spike proteins or 3C-like proteases. Initial in vitro testing confirmed inhibitory effects of the in silico drug candidates. By combining both methods, in silico design and in vitro testing, we expect that a number of promising molecules will be finally identified for further rapid development towards therapeutic medicine against SARS-CoV-2.

In order to quickly provide therapeutics for the treatment of patients suffering from COVID‑19, drugs already approved for other indications can be screened to determine whether they are also suitable for the treatment of a SARS‑CoV‑2 infection. This approach is known as repurposing. The Fraunhofer Institute for Molecular Biology and Applied Ecology IME has already identified several drug candidates against SARS‑CoV‑2 from a repurposing library. In order to improve the efficacy of these candidates and to reduce possible side effects, the release of these drugs should take place as specifically as possible at the site of infection. Based on the criteria of biological activity, mechanism of action, pharmacokinetics, and physicochemical properties, five drug candidates were selected for further investigation of suitable formulations for application to the respiratory tract.

In parallel with the identification of the drug candidates, Fraunhofer IGB has developed tissue- and cell type-specific nanoparticular drug delivery systems for these drugs together with FIP_DD@HUJI. The partners are drawing on experience in formulating antiviral compounds against HSV-1 (herpes simplex virus) for safe transport and targeted release in human 3D tissue models. These formulations are based on liposomal release systems, which will now be investigated in combination with the drug candidates.